Win at the Commonwealth Games 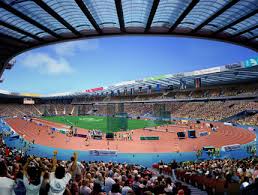 The Commonwealth Games are returning to Scotland for the first time since the Edinburgh Games of 1986. This year Glasgow is the city playing host to this fantastic event and competitors and tourists from across the globe will be flocking there this summer as a result.

What can you see at the Games?

From the 23rd of July to the 3rd of August, there will be 261 events taking place across 17 sports. Sadly if you’re a big fan of competitive walking, synchronised swimming or Greco-Roman wrestling then you’re not in luck, they’ve been removed from the Commonwealth Games roster since the 2010 Games. Then again, if you’re a fan of competitive walking there’s always the option of racing somebody to the bus stop without even letting them know that’s what you’re doing. We don’t recommend trying that approach with the Greco-Roman wrestling though!

There are still plenty of sports left to enjoy at the Games, including –

The athletics events will be taking place at Scotland’s iconic football stadium, Hampden Park. Meaning that, just for those two weeks, the famous Hampden roar will change from a shout of “Strachan! Get Ikechi Anya on!” to rapturous applause for a lung bursting effort in the 100m finals! At present, all eyes are on the papers and internet, scanning them for news on whether Jamaica’s running track superstar Usain Bolt is going to put in an appearance. ‘Sources close’ to him think he’s 95% certain to compete but the not knowing only adds to the tension and excitement of the build-up!

Scotland has a proud history when it comes to boxing, with famous names like Ken Buchanan and Jim Watt springing to mind. The Commonwealth Games themselves have proved to be a great opportunity to see some hugely talented boxers in action before they turn professional. Famous names to hold a Commonwealth gold medal include Barry McGuigan and Lennox Lewis. Scotland’s own Alex Arthur is another fighter who won Commonwealth gold and went on to wear the belt of a world champion.

The preliminary rounds of this year’s boxing event will be held within the SECC Precinct, with the finals being held at the SSE Hydro.

Scotland gave the world the most decorated Olympic cyclist of all time in the shape of Sir Chris Hoy and now the country looks set to also put on a fantastic cycling event at the Commonwealth Games. Sir Chris himself is acting as an ambassador for the Games and we’re sure he’ll be honoured to attend the new velodrome which bears his name. Located close to Celtic Park in the city’s East End, it’s sure to make a tremendous venue.

Planning on having guests during the Games?

The influx of tourists to Glasgow for the Games means that you may have friends visiting or you may even be letting out a room or your entire home. Sites like Airbnb are making it easier than ever before for people to do this. Then again, though the process may seem simple, there’s still the awkward question of what you’re going to do about all the junk cluttering up the spare room that you’re meant to be letting out…

Decluttering can sometimes seem like a daunting and potentially expensive experience but it really needn’t be.

How can we help?

At Flexistore storage, we’re here to make your life easier, not more complicated! Our storage process couldn’t be simpler.

1) We deliver one of our secure vaults to your doorstep.

3) We’ll collect it and take it to our secure storage centre.

4) We deliver it to the address of your choosing when you need your things back.

What to do next

You can use our storage estimator to work out how many vaults you need. You can also get a free storage quote online but if you prefer to speak to somebody then please give us a call and one of our friendly team members will be happy to help!