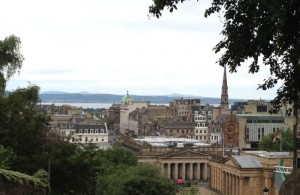 Edinburgh – what do you think of when you hear the name?

Edinburgh is a world famous city, known for being the capital of Scotland, the setting for a magnificent castle, and the home of the world’s largest arts festival. That would be enough for many cities, but not for Auld Reekie. Edinburgh has also been the birthplace of a number of items that might be lurking within the boxes you’ve just entrusted into our tender storage care. What items might those be? Well let us give you five…

Also see our previous post where we give you 6 fantastic reasons for why you should pack up and move to Edinburgh.

OK, so maybe we’re cheating a little bit by plucking out GTA III, but it’s like Terminator 2, it’s the one that’s actually more famous than the original. The original Grand Theft Auto was developed by computer game creators DMA Design in the late 1990s, when the company was still based in Dundee. By 2001, they’d been renamed as Rockstar North, were based in Edinburgh and were launching the 3rd instalment of this, to say the least, gritty gaming experience. GTA III was the first edition where the gameplay offered a three-dimensional view, allowing you to feel less like you were playing a game and more like you were directing a Zack Snyder movie. With the release of GTA V last year, the franchise is still going strong.

Remember landline phones? Remember when they were a thing? Remember when one of your parents being on a long phone call meant that your social plans for the weekend would never be resolved and you’d just have to stay in and watch the Golden Girls instead? Just us? Oh. Anyway, in this fast-paced mobile world you’ve probably still got a chunky land-line phone that you can’t bear to part with because you’re pretty sure it’s only about 10 years away from taking on retro-cool. Have you stopped to ponder the origins of this mono-locational communication behemoth though?

No? Then let us enlighten you. The telephone was invented by Alexander Graham Bell, a man born and raised in Edinburgh. On March 10th, 1876, Bell spoke the famous words “Mr Watson, come here, I want to speak to you” into his prototype device. The words were heard clearly in the adjoining room by Mr Watson, his assistant, who presumably sat fizzing for a few minutes over the lack of a “please” before heading through to confirm that it worked. How excited was Bell by his invention? Well, apparently he never actually had a telephone in his office, considering it to be too big a distraction from his work. He probably wouldn’t have been a Farmville kind of a guy either.

Let us point out straight away that we don’t allow any foodstuffs or perishables into storage, but for the sake of this article we’re going to hypothetically say that you’ve sneaked a jar of Bovril into a storage facility and the world hasn’t ended. (Though was it not Nostradamus himself who said “Liquid beef in a crate, planet go bye byes”? No.) Bovril is one of those things that’s always around us – when we say always, what we mean is it’s in the supermarket, it’s at the football, and there’s a jar of it in your gran’s cupboard that she bought seventeen years ago, “in case guests come round who like it” – but that we never really stop to think about. So what actually is it? Well, it’s liquid and it’s beefy. We’re storage guys, we’re not slogan writers. (I mean, give us a call and we’ll see what we can do, but it’s only ever going to be a hobby.)

Anyway, Bovril was created back in the 19th Century by John Lawson Johnston, who was born in Roslin (Yes, the home of Rosslyn Chapel as immortalised in The Da Vinci Code in which Tom Hanks hunts for the secrets of liquid beef contained in a number of gravy paintings. We fell asleep in the cinema but we’re 57% sure we got the gist of it.), near Edinburgh. Lawson Johnston eventually took over his uncle’s butchers shop in the city, with the business becoming very well established. His beef stock was made in a way that allowed it a particularly long shelf life and became so popular that he was able to open both a second shop and a factory.

He emigrated to Canada in 1871, but it was the basis of his experiments in Edinburgh that would lead to his biggest achievement. In 1874 he won a contract to supply the French army during the Franco-Prussian war. He adapted his stock formula to create a version that, although solid at room temperature, was hydrolysed with alkali to make it semi-liquid. In this state, the resulting product was easier to package, transport, and measure. For his efforts, he was awarded the Order of the French Red Cross. Try chipping in that little fact the next time you’re queuing up for a pie at the football.

As with any drink, you wouldn’t want to drop a tray loaded with Bovrils. If only somebody would come up with a revolutionary device making it easier for waiting staff to carry trays without dropping them. If only. It’d be quite a bold tactic if we’d just written those last three sentences without somebody already actually having come up with that revolutionary device, wouldn’t it?

Well, you’ve seen through us, it does exist. In 2009, waitress and event manager Alison Grieve from – you’ve guessed it – Edinburgh, witnessed one of her colleagues dropping a tray full of champagne glasses (Are we alone in thinking that somebody should invent a large straw tipped with a filter for removing shards of glass for just those kind of situations?) at a corporate event for a delegation of international lawyers. (See, it starts off as a sad story and then ends on the happy note of a group of lawyers not getting any champagne)

Some people may just have thought, “I’m glad that wasn’t me” but, thankfully, Alison showed a little bit more initiative than that. Armed with her university studies in the History of Film & Photography, she somehow went on to design a finger-hold device for trays, based on principles of physics, load dispersal, and counter movement. Meanwhile, to achieve a natural balance, someone with a Physics degree was probably completing a ground-breaking documentary on the filming of Battleship Potemkin. The Safetray device is now in use throughout Europe, America, and the Middle East. No word on whether that waitress who dropped the initial tray was on commission.

Where should you store your exciting Edinburgh-born items?

At Flexistore we’re ready to help with any of your self storage needs in Edinburgh. Moving house? Decluttering? Has a collection outgrown your home?

For a free no-obligation storage quote, or simply to find out more, please call us.