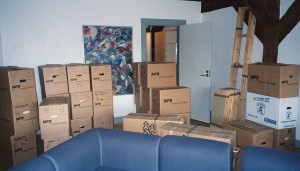 Modern city living has more than its fair share of charms, but it’s not like the average urban apartment is the kind of place where storage space is in plentiful supply. In fact, making the most of the space you have available to such an extent as to even be comfortable is tricky enough – precisely why self-storage units are proving to be no less than Godsends for thousands of UK city-dwellers!

In so many instances when an individual, couple or family makes the move to a busy urban centre, they may in fact be downsizing quite a bit from their prior home. As such, this inevitably brings the prospect of having to consider what to keep and what to get rid of as there may simply be no room available. Of course, the alternative is to take on a cheap self-storage unit to house all the bits and pieces that cannot be squeezed into the new place – why get rid of anything you’d much prefer to hang onto?

If, for example, you’ve made the move to a wonderful new apartment that’s blessed with fantastic views and plenty of daily sunshine, there’s a strong chance you’re going to want to make the most of your balcony. From tables to chairs to barbecues to ornaments and so much more, you really can make even a compact balcony into something quite incredible. However, winter storage can be a problem as while leaving things out during all weathers isn’t a good idea, you might physically have no place to store them. Self-storage units can be hired on a temporary basis for exactly such purposes – the perfect solution for the lowest possible price!

The same also rings true for any other kind of seasonal gear you may have around the place that’s prone to spending months on end doing nothing but clutter the place up. From bikes to skis to that huge case of summer clothes you won’t be wearing for quite some time and all that amazing outdoor gear for camping, there’s a time and a place you’ll be needing this stuff – until then, why not get it out of the way with a self-storage unit?

Chances are you’ll find a small arsenal of bits and pieces around the home that you won’t be using for the foreseeable future at least. Things like power tools, decorating supplies, heavy-duty cleaning equipment and really anything you tend to need on a periodic basis at best represents just the kind of stuff you’d be much better off keeping out of your way – a self-storage unit being just the ticket.

Last but not least, if you have even the slightest of concerns with regard to the safety and security of anything valuable or irreplaceable around your new city dwelling, there’s much to be said for the ultra-secure services of a self-storage facility where CCTV and guard patrols take care of everything.